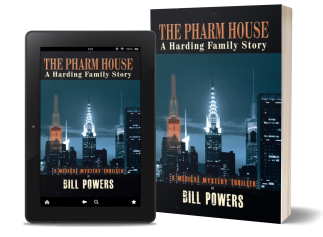 Our February Book Pick is The Pharm House, a foreboding and darkly suspenseful debut medical thriller by Bill Powers set in the hidden underworld of the global pharmaceutical business. Even though The Pharm House is set in a pharmaceutical company, it is really a story about family. It’s about Nicholas Harding, a young scientist/executive at Marshall Pharmaceutical. Nicholas is a regular guy – a single Dad trying to raise a precocious 11-year-old daughter while clawing his way up that ever so slippery middle management ladder. But unknown to Nicholas, there are dark forces inside Marshall Pharmaceutical and he is about to be drawn into their plans and finds himself fighting for his career, his family and perhaps even his life.

View all posts by pageboundsuccess